Ethnic arts and crafts have become a profitable rural industry, lifting villages in Hunan province out of poverty and contributing to rural vitalization.

About 97.5 percent of villagers in Hequn, in northwestern Hunan's Zhangjiajie city, are members of the Bai ethnic group. Many of the Bai people are making a living selling cloth made with tie-dyeing, a method involving the application of colors or patterns to textiles that they use to make their traditional clothing.

About half the villagers in Hequn participated in a workshop last month on tie-dyeing by Zhang Pihe, a 43-year-old Bai woman born in Dali city, Yunnan province.

Zhang inherited the skill from her grandmother.

"Tie-dyeing has been passed on through generations," Zhang said, adding that she would earn only as much as 2 yuan (29 cents) for 10 pieces of work when she was young. 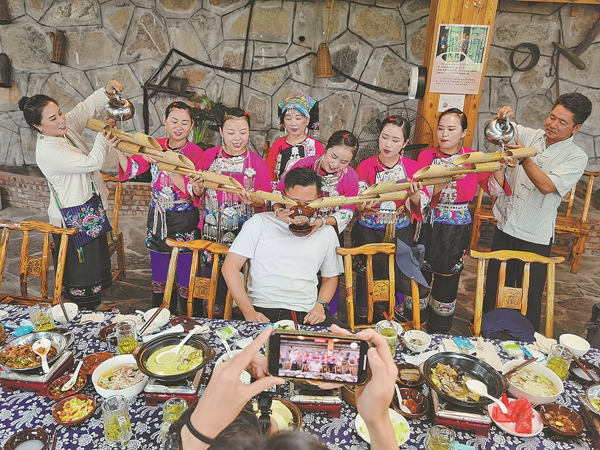 Villagers welcome a guest by cascading liquor down bamboo chutes in Shibadong village in Xiangxi Tujia and Miao autonomous prefecture in Hunan province on Aug 4.

These days, a piece of tie-dyed cloth sells for about 30 yuan in Hequn.

"Though the handicrafts are more profitable now, it is not only money that we are pursuing, but also the inheritance of Bai culture," she said.

The village of Zhoucheng in Dali, Zhang's hometown, and Hequn are sister villages.

The first group of Bai people moved from Zhoucheng to Hequn in the 1980s and brought their handicraft techniques with them. The villages formed an official partnership in 2012.

Yang Shuchun, Zhang's son, is also involved in the business of tie-dyeing, which he learned as a child from his mother. He wore a tie-dyed blue and white shirt while participating in last month's workshop.

Yang said he remembers his parents would start work early in the morning, drawing the patterns they liked, brushing on colors, pinching some areas of the cloth and tying them tightly with thread. 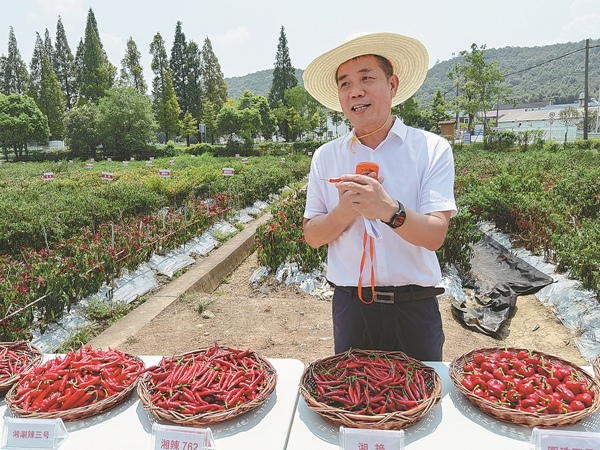 "I was curious about how the patterns were created by blocking the dye from reaching certain areas," he said.

He is still learning tie-dyeing skills from his parents and plans to start independently making handicrafts in a few years.

"I just want to inherit the ethnic arts," the 21-year-old said.

These days, handmade clothes, hats, bags, shoes and other products made with tie-dyeing are sold at wholesale markets, on online platforms and via livestreaming. Prices range from 50 yuan for a bag to 1,200 yuan for a traditional Bai costume.

The Bai ethnic group is one of 55 in Hunan. Combined, there are 7 million people from ethnic minority groups, including the Miao and the Tujia, in the province, accounting for about 10 percent of its population.

Shi Shunlian, former Party secretary of the village of Shibadong in Xiangxi Tujia and Miao autonomous prefecture, has opened a Miao embroidery cooperative.

"I was really embarrassed when President Xi Jinping asked me during his visit in 2013 if villagers were striving to live a moderately prosperous life. I said not yet, because we were really poor at that time," the 68-year-old said.

Given that women in the village excel at creating Miao embroidery, which is a national intangible cultural heritage, she established a cooperative in August 2014 to sell handicrafts outside the green mountains. 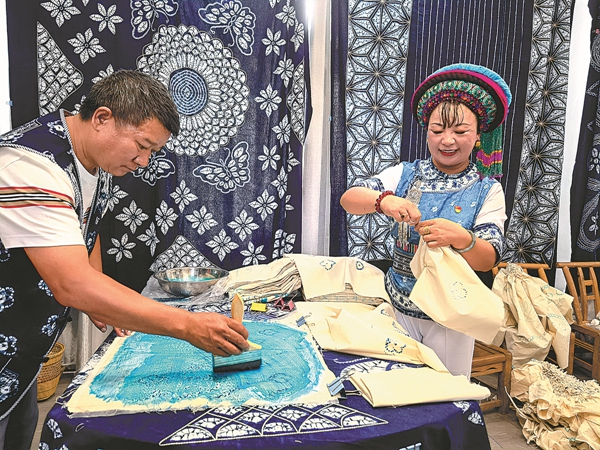 In 2018, women from the village began working with CRRC Group, the State-owned rail stock manufacturer, to make handicrafts featuring high-speed railway designs for the company.

"I never expected that we could earn money from the embroidery that was previously only used to decorate our clothing," Shi said. "The products are now being exhibited to the world, and we can make money by doing handicrafts at home."

Shibadong has been able to use its traditional Miao ethnic specialties, as well as agricultural products such as kiwi fruit and peaches grown in the mountains to help lift the village out of poverty.

The per capita income of the villagers has increased from 1,668 yuan in 2013 to 20,167 last year, and their collective income last year reached 2.68 million yuan, according to the Hunan Bureau of Rural Vitalization.

Before Shi Chengfu opened a homestay in the village in 2015, he earned as little as 10,000 yuan a year as a farmer. By venturing into tourism, he now earns an annual income of 80,000 yuan.

"We have benefited from the upgrading of roads and transportation," the 60-year-old said. "It used to take us a three-hour round trip to go to town from the village. Now, going to town is just a 10-minute drive."

Young people are now more willing to return to Shibadong to work as there are more opportunities thanks to the rural vitalization efforts, according to Shi Jintong, Party secretary of the village.

"Those who speak Mandarin well can work as tour guides, while others can work in the agricultural cooperatives," he said. 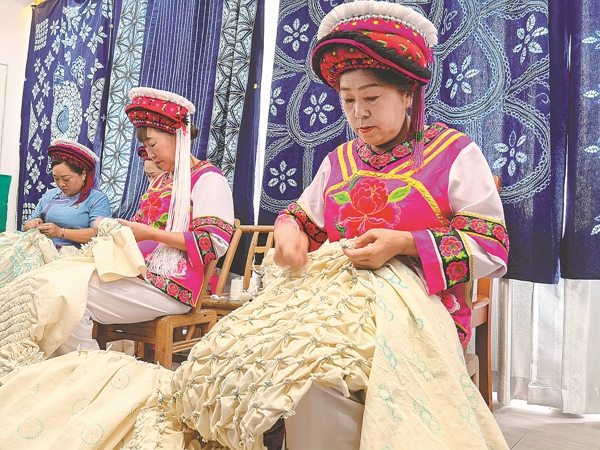