The scenery was regarded as beautiful as a fairyland when the sea of white clouds and mist floating around the peaks and forests of the corridor.

The magnificent view appeared in the 5-kilometer corridor after a rain. On both sides of the gorge are verdant trees, fragrant wild flowers and rows of strange peaks and stones.

The rocks form 200 statuesque features that look like people, objects, birds and animals.

They are in a variety of shapes and are hung side-by-side on the cliffs, making the beautiful natural wonders seem like ink paintings of master artists.

Wulingyuan, in Zhangjiajie, has steep mountains, strange peaks, beautiful waters, secluded gorges and mysterious caves. It is a world natural heritage and on of the first world geoparks in the country.

It is also the first National Forest Park and an early 5A tourist attractios in China.

The scenic spot is crisscrossed with ravines, towering rock peaks, green trees, with numerous animals and birds. It has a reputation as a natural labyrinth and has even been called "the most wonderful mountain in the world", "the Memorial of the Earth" and "a huge bonsai". 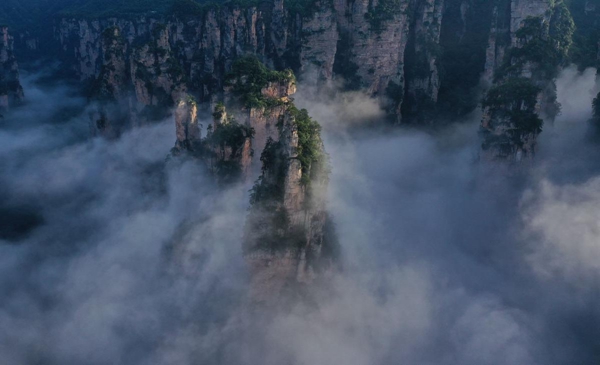 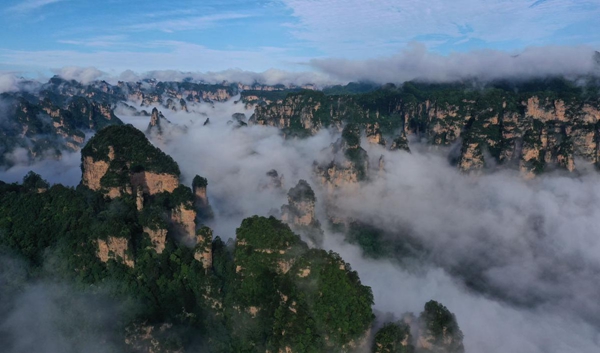 Awe-inspiring scenes appear after a rain in Zhangjiajie's Shili Corridor