Management of wildlife strengthened amid epidemic

Zhangjiajie, a well-known tourist city in northwestern Hunan province, issued a circular on Friday banning the trade and consumption of the Chinese giant salamander, a species on the national second-class protection list and Appendix I in the Convention on International Trade in Endangered Species of Wild Fauna and Flora, according to a report from Rednet.

The local authorities will be on watch for reports from the public through the city's 12315 hotline and other service platforms, and violation of the circular will be investigated and dealt with in accordance with the law. Suspected criminal activities will also be investigated.

Reports from the Hunan provincial forestry authorities said since Jan 23 a total of 23,3901 wildlife breeding places have been closed, 5,254 wild animals and their products have been confiscated and 425 protected natural areas have been closed.

The announcement said wild animals and their products are banned from sale, purchase, use, shipment, carrying and delivery. Related advertisements and trade services also are forbidden.

In China's southernmost province of Hainan, for instance, all wildlife breeding farms have been closed since Jan 22 and the tropical island province has completely suspended the examination and approval of artificial breeding, sales and use of snakes, bamboo rats, badgers, civets and other wild animals and their transport out of the island province, according to a report from Xinhua News Agency.

As of Feb 6, 758 artificial breeding farms have been inspected, informed of the situation and closed, according to the provincial forestry administration. 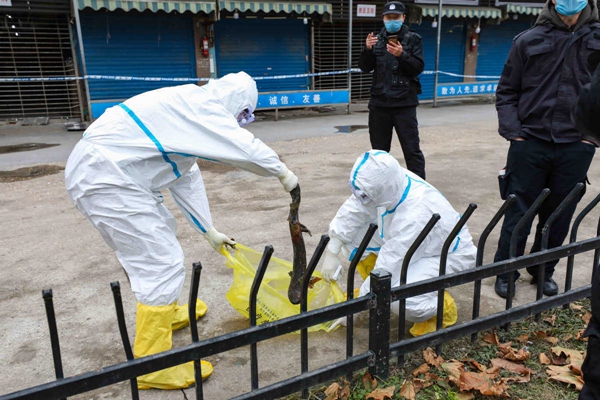