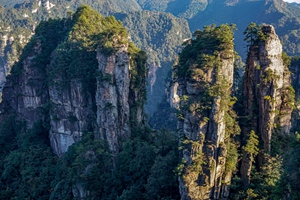 The outstanding sandstone monoliths dressed in the green foliage of Zhangjiajie Forest Park's roving summits, known as the "'Avatar' Mountains," are the inspiration for the Pandora scenery and bewitching landscape of director James Cameron's mythical blockbuster film "Avatar." Writer Nick Kontis take you on a tour of China's first UNESCO World Heritage Site. 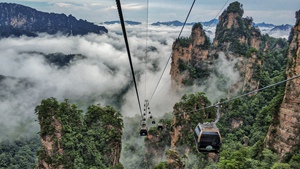 The land of "Avatar" will astound you. Yuanjiajie is where you will find the jaw-dropping highest peaks and incongruous rock slabs. The cable car ride to the soaring cloud summit provides close up photos as you pass by the cavalcade of towering formations. 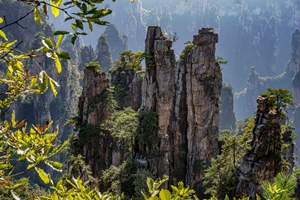 Tianzi (Son of Heaven) Mountain Nature Reserve is where you view asparagus-like spirals sticking out from the deep valley below in uninterrupted clusters is one of the most scenic locations in the Wulingyuan preserve.

In the Tianzi Mountain of Zhangjiajie, you'll find crescendos of sandstone rock steeples buried deep in the ground below. A dreamlike stone forest, the surreal juxtaposing spirals are especially impressive in the "Sea of Clouds."' To get acquainted with the park's many focal points, allow yourself at least two days for exploration. 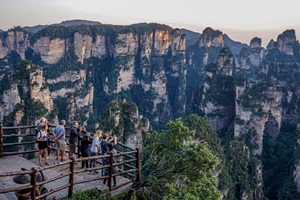 A rare day with fewer visitors is uncommon in the scenic spots of Hunan's Zhangjiajie National Forest Park. Throughout the park, lookout points and observation decks create excellent venues for photographing the unusual rock formations. English speaking guides are available for hire, but those wishing to go on their own can pick a map upon arrival and follow the well-marked trail system. 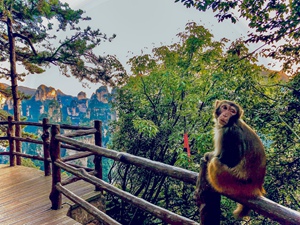 On the spotless Zhangjiajie trails, you might encounter Rhesus Macaques Monkeys. The aggressive primates have little fear of humans. Always keep your distance. While feeding the monkeys for a photoshoot might seem like a novel idea, there is a reason why signs are stating not to feed animals in the park.

The Grand Canyon of Zhangjiajie is an uncanny masterpiece created years in the making. Vistas of vertical drops of the floating mountains of Avatar keep visitors enthralled for days. Throughout the park's footpaths, a flourish of outstanding scenery thrives. 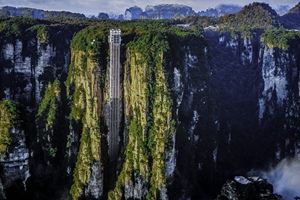 An exhilarating stairway to heaven. The Bailong Elevator took three years to build at the cost of almost 20 million dollars. The sky-scraping glass elevator rises 1,070 feet on the side of a steep rock face mountain. Among the many accolades, it is the world's fastest and tallest outside passenger elevator. It can transport visitors to the top in less than two minutes. 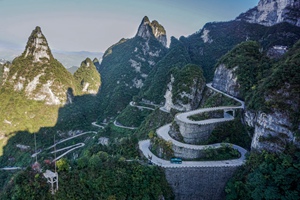 From the cable car up to Tianmen Mountain and while on the walking path, you'll find spellbinding views of the twists and turns of 99 Bending Road. The distance to the top is 6.7 miles. For much of the year, the road is shrouded in mist. 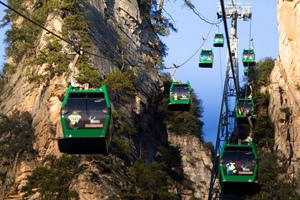 Most journeys to the Avatar vantage points of the Tianzi Mountain and the Yuanjiajie scenic area begins with a breathtaking cable car ride up to top to view its fairytale landscape. 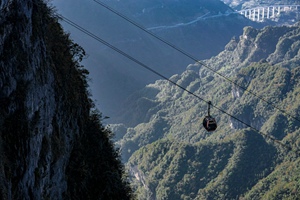 Tianmen Mountain cable car is the world's longest cableway in the world at 4.3 miles. One a clear day the cable car provides sweeping panorama views of the valley below. It's not for those with a fear of heights; as you arrive near the top, the large gondola traverses 37 degrees over sheer cliffs to its culminating precipice. 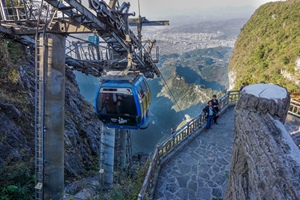 The trip to the summit of Tianmen Mountain soars to a height of nearly 5,000 feet and requires a funicular cable car ride over 4 miles. The cableway can transport 1,000 passengers per hour, and the average voyage takes a half hour. 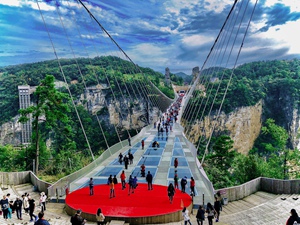 Now considered one of China's main attractions, in the Zhangjiajie Grand Canyon, is the world's highest and longest glass bridge and stretches between two cliffs. The monumental walkway is near 1000 tall and over 1400 feet long. 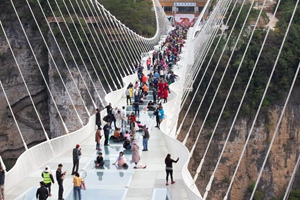 When walking on the glass-bottomed bridge, you can gaze down at the deep gorge 1000 feet below. From the overpass, the panoramic views of the enormous valley dazzle visitors.

China, with a population of 1.4 billion along with a striving economy, has produced mass tourism. The bridge now possesses an overwhelming amount of tourists who come to gawk and examine the glass bridge. The 18-foot-wide passage was limited to 8,000 visitors per day. Now over 10 times that amount come to gaze at the architectural marvel. 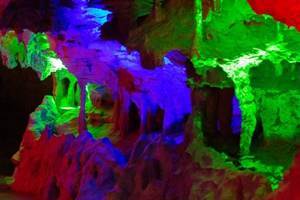 The impressive Jiutian Cave scenic area's karst landform dazzles visitors with a kaleidoscope of colors. In the complex, there are ten waterfalls, seven lakes, five bridges, and four underground rivers. 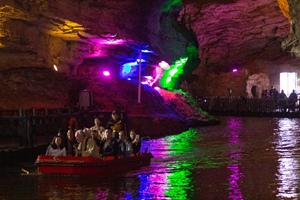 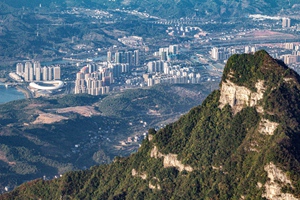 From the top of Tianmen Mountain National Forest Park, you'll find superlative views of Zhangjiajie Town below. The city is located five miles from the top of the climb to the Stairway to Heaven's door. 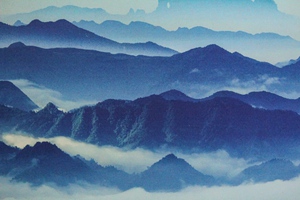 The UNESCO-recognizsed Zhangjiajie Geopark is a geological marvel located in the hinterland of the Wuling Mountain range. At an elevation ranging from 1,000 to 4,000 feet above sea level, weather patterns change quickly. For the best photos of the mythical mist-shrouded topography, get up early for sunrise or stay late for sunsets. 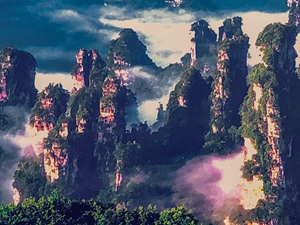 "Avatar," released in 2010, showcasing the stunning stone forest of Wulingyuan, and the Tianzi Mountain forever put Zhangjiajie on the traveler's radar. There are somewhere around 250 peaks and over three thousand rock slab pinnacles in China's first World Heritage Site. 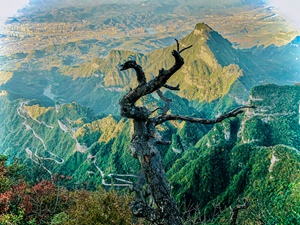 From an elevated perspective on Tianmen Mountain, you'll see ancient timeworn trees, earth-tone shrubs, lush green hillsides, along with the twists and turns of 99 Bending Road. Arrive early to beat the afternoon rush. 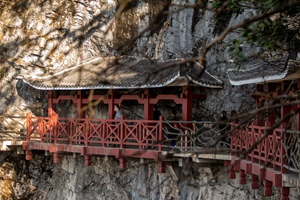 Tianxuan Plank Road is built below the cliffs of Tianmen Mountain and soars to lofty heights of nearly 5,000 feet. The well-designed winding walkway guides crowds to numerous observation points. 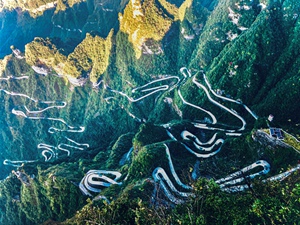 Some sojourners choose to travel by bus to the top of Tianmen Mountain. Heaven-Linking Avenue, or as it's better known 99 Bending Road, is a treacherous thoroughfare built in 1998 that winds up the mountain and comes complete with 99 turns. 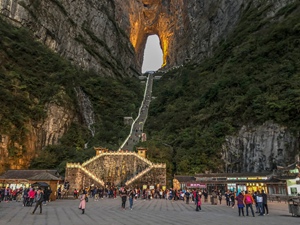 Tianmen Mountain is the highest peak in Zhangjiajie. Its pièce de résistance is a 100 feet tall and almost 200 feet wide hole formed by heavy rains, wind, and erosion. As the number 9 in Chinese is a symbol of heaven on earth, along with the 99 Bends Road below, there are 999 steps leading up to the Tianmen Cave.