Zhangjiajie opens to the outside world through ‘Silk Road Stations’

The ‘Overseas Strategy’ of Zhangjiajie Tourism is further implemented

"Silk Road Stations" integrates the two concepts of "Silk Road" and "Stations", aiming to build an international exchange and cooperation platform to connect Zhangjiajie with many foreign tourism, economic, trade and cultural enterprises, so as to make Zhangjiajie a link and bridge for multi-national and multi-enterprise exchange and cooperation. This is an innovation of Zhangjiajie's tourism marketing, and an important measure for Zhangjiajie tourism to go outside. This was the first time for a prefecture-level city to establish tourism cooperation institutions in foreign countries.

The launching of "Silk Road Stations" is a practice carried out by Zhangjiajie city in response to the Belt and Road Initiative. Located on the "21st Century Maritime Silk Road", Zhangjiajie cooperates with tourism and culture institutions in major cities along the road according to the needs of tourism cities, and carries out businesses such as external publicity, tourism marketing, investment consultation, cultural exchange and international trade, which is in line with the strategy put forward by the central government to "build a community of shared interests, destiny and responsibility featuring mutual political trust, economic integration and cultural inclusiveness".

At the launching ceremony, 10 "Silk Road Stations" jointly established by Zhangjiajie local travel agencies and large tourism organizations in Berlin, Tokyo, Seoul, Kuala Lumpur, etc. were unveiled. They will act as a bridge for Zhangjiajie tourism to further expand to overseas markets and strengthen international exchanges. In the future, Zhangjiajie will successively set up "Stations" in the countries along the "Belt and Road" to strengthen bilateral cultural and tourism cooperation.

Let's trace back to July 18, 2017, when the capital of Kazakhstan, Astana, witnessed the unveiling of the first "Silk Road Station" by Ouyang Bin, deputy mayor of the Zhangjiajie Municipal Government, and officials of Astana. The local media stated in writing that this is a practice taken by Zhangjiajie to implement the Belt and Road Initiative and to innovate the model of international tourism, cultural and trade cooperation.

Subsequently, two "Silk Road Stations" were unveiled in St. Petersburg, Russia and Prague, Czech Republic, which deepened Zhangjiajie's opening up to the outside world.

"This is a historical opportunity!" The Tianma International Travel Service, in cooperation with the German Leniard Experience Tour, established a "Station" in Berlin, the first foreign institution of the company. Chairman Peng Shuangquan said that in face of the historical opportunity of the Belt and Road Initiative and the rapid development of overseas markets, the establishment of the "Station" will strengthen cooperation with foreign tourism agencies, and help his company achieve leap-forward development.

Peng Shuangquan's words are well-founded. In the first half of this year, the number of inbound tourists in Zhangjiajie was 622,600, a year-on-year increase of 164.87 percent, the highest in the province; The foreign exchange income from tourism reached 390 million U.S. dollars, a year-on-year increase of 253.89 percent. The inbound tourism revenue and growth rate ranked first in the province.

The rapid development of overseas markets has increased the needs for overseas tourist publicity. As a result, 10 "Silk Road Stations" were unveiled, and the English-version website of "Timeless Zhangjiajie" was launched simultaneously, which will further increase the international influence of the Zhangjiajie brand.

It is understood that the website was jointly created by Zhangjiajie Culture, Tourism, Radio and Sports Bureau and China Daily website. Founded in 1995, China Daily website is the first national media to launch an online site in China and has become a national comprehensive online media site and the most influential English portal in China. With more than 20 years of experience in construction and operation of English websites, it has many advantages in content, technology and promotion. It is reported that the main channel for foreigners to understand China is China Daily. Reprinted most by foreign media, China Daily has become one of the most important platforms for China to conduct external publicity.

The English-version website of "Timeless Zhangjiajie" is aimed at visitors who are interested in Zhangjiajie around the world. Established on the basis of the reading habits of Westerners, it focuses on promoting food, sceneries, ethnic minority culture, festivals and tourism related information, and is a "Zhangjiajie Tourism Encyclopedia" for overseas tourists. The website is not only a platform for Zhangjiajie to display itself and to provide local information, but will also act as a media for Zhangjiajie government to attract investment.

"Overseas tourists have greatly driven the growth of Zhangjiajie tourism." Liu Ge'an told reporters that in face of the historical opportunity of the Belt and Road Initiative, the city has implemented the strategy of "benchmarking, quality improving, and tourism-oriented development", and promoted the construction of an internationally known tourist attraction. It strives to achieve an annual reception of more than 100 million visitors by 2020, including more than 10 million overseas tourists, and a total tourism income of more than 100 billion yuan. 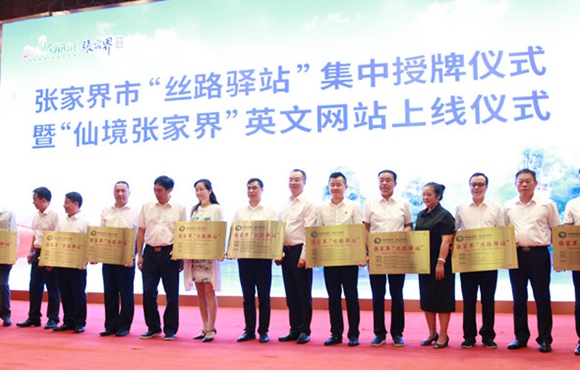